This doesn’t seem like a time for value, does it? The pandemic is on its last legs and stocks are at new all-time highs. With pent-up demand and super accommodative monetary policies, who wants to invest in value right now?

Undervalued stocks may not stay undervalued for long, especially if they’ve got a high Zacks Rank. These are the stable names that could be among the biggest beneficiaries of a return to normal. And we’ve got a screen that will help you find them.

The Undervalued Zacks #1 Rank Stocks screen will help you find names that may be overlooked while most investors seek out growth. Take a look at three names that recently passed this screen. However, these positions can change quickly, especially is such hectic times, so make sure to also look at the full list for a broader view of the landscape.

Reports that department stores are dead seem to be greatly exaggerated. If they’re really pushing up daisies, then how can the retail – regional department stores space be in the top 2% of the Zacks Industry Rank? And how could Macy’s (M) deliver such a strong fiscal first quarter performance despite all the challenges from the pandemic and the Amazonification of retail?

Well, to be fair, it’s not all business as usual. M and other department stores need to evolve to stay relevant. That’s what the ‘Polaris Strategy’ is all about. The three-year plan is meant to better adapt to the new retail ecosystem by strengthening customer relationships, expanding assortments, accelerating digital growth, optimizing stores and cutting costs. And so far, it’s working!

Shares of M are up approximately 166% over the past 12 months, including nearly 70% this year alone. It has beaten the Zacks Consensus Estimate in each of the past seven quarters with an average surprise of nearly 162% over the past four.

Last month, M helped to cap off an extraordinarily strong earnings season with a fiscal first quarter report that really got the market’s attention. It reported earnings per share of 39 cents, which topped the Zacks Consensus Estimate by 195%.

Net sales of $4.7 billion jumped 56% year over year while also easily beating the Zacks Consensus Estimate at just under 4.5 billion. Perhaps most importantly, digital sales rose 34% in the quarter and contributed 37% to net sales. That’s how you compete with Amazon and a pandemic!

But perhaps the best evidence of a strong future for M is the raised outlook for 2021, which is still a pretty rare and noteworthy development in the waning days of covid. It now expects adjusted earnings between $1.71 and $2.12, instead of the previous guidance of 40 cents to 90 cents. Net sales are now seen at $21.73 billion to $22.23 billion, compared to the previous range of $19.75 billion to $20.75 billion.

Now that things are finally opening up, it’s time to buy some new clothes for the new normal. You don’t want a friend to see you for the first time in over a year wearing some old rags from 2019. That’s why a lot of retailers are reporting solid quarterly reports, including Urban Outfitters (URBN).

The company is a lifestyle specialty retailer that offers fashion apparel and accessories, footwear, home décor and gifts. Its brands include Urban Outfitters, Anthropologie, Free People, BHLDN and Terrain. As part of the Retail – apparel & shoes space, URBN is in the top 16% of the Zacks Industry Rank.

Impressively, URBN showed sales growth across all brands and segments in its fiscal first quarter results, as its younger clientele are among the most impatient to get back to normal. Net sales in the quarter reached $927.4 million, which improved 57.6% from last year and beat the Zacks Consensus Estimate by more than 3%.

Earnings per share in the quarter reached 54 cents, which blew the doors off the Zacks Consensus Estimate of 16 cents. The positive surprise was more than 237%, bringing the four-quarter average surprise to just under 130%.

Analysts are feeling pretty good about the company’s future, given its focus on spend-thrifty younger consumers, the re-opening economy and the URBN’s track record of success. The Zacks Consensus Estimate for this year (ending January 2022) is now $2.47, which is up 30% over the past 60 days. Expectations for next year (ending January 2023) are $2.74, accounting for an advance of more than 20% over the past two months and year-over-year profit growth of 10.9%. 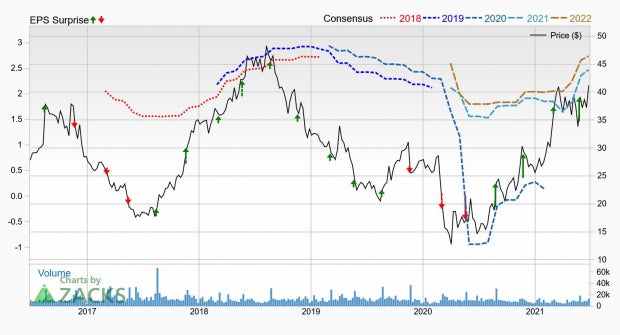 There were plenty of sports and outdoor activities that people could have enjoyed during the pandemic, including golf, tennis, cycling, fishing, rock climbing and, of course, barbequing. And you know what’s the best part of all these sports/activities? They’re going to be just as popular post-Covid… maybe even more so!

And in addition to all that, the closer contact sports that require face offs, huddles and jump balls will be getting back to business in schools and playgrounds all over the country. Therefore, whether we have to be socially distant or not, DICK’S Sporting Goods (DKS) has everything you need to stay active.

The company operates as a major omni-channel sporting goods retailer with 730 stores in 47 states as of May 1. As part of the retail – misc space, it’s in the top 15% of the Zacks Industry Rank. Shares are up 151% over the past 12 months, including more than 83% so far this year.

Likewise, net sales of $2.9 billion topped our expectations by approximately 31% and improved 119% year over year. Same-store sales were up 115%, which included an increase in eCommerce sales of 14%. 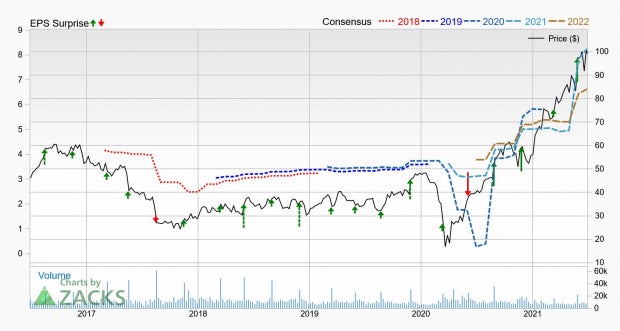 In addition to the stocks you read about above, would you like to see Zacks’ top picks to capitalize on the Internet of Things (IoT)? It is one of the fastest-growing technologies in history, with an estimated 77 billion devices to be connected by 2025. That works out to 127 new devices per second.

Zacks has released a special report to help you capitalize on the Internet of Things’ exponential growth. It reveals 4 under-the-radar stocks that could be some of the most profitable holdings in your portfolio in 2021 and beyond.

Want the latest recommendations from Zacks Investment Research? Today, you can download 7 Best Stocks for the Next 30 Days. Click to get this free report